In September 2019, the Drupal Europe conference was held, announcing the official release date of Drupal 9.0! This is scheduled for June 3, 2020. Of course, when a new version arrives, you're probably wondering what's new compared to the old versions. We will explain everything in this article!

Do you have a project with Drupal?

What are the changes between Drupal 8 and Drupal 9?

Dries Buytaert - the founder of Drupal - said that Drupal 9 will be a refined version of Drupal 8, mainly because Drupal 8 is built on top of the old version, adding new features in the form of backwards compatible code. This is very important because it allows for easy and safe migration from Drupal 8 to Drupal 9.

Have you noticed that recent versions of the Drupal Open Source CMS do not guarantee any backward compatibility with previous ones? Indeed, each time you upgrade, you have to perform many tasks such as:

You probably noticed that, but it is a long process to do.  To overcome this, the Drupal 8 version will have to be compatible with Drupal 9. Also, upgrading from version 8 to 9 will have to be much easier to do compared to version 7 to 8.

Behind its misleading title, Drupal 9 is not a revolution as such, but rather an "update" of the technical platform characterized by the switch from Symfony 3 to Symfony 4 and the elimination of any obsolete elements. Two key differences will stand out with version 9 of Drupal :

Therefore we can say that this new version is quite identical to Drupal 8.8.x, which means that there will be no new features. It will rather be called a minor release. Indeed, it will be the version 9.1 whose release date is scheduled for December 2020 that will bring the new core features.

What are the technical modifications to Drupal 9?

As we have just explained, this new version is an update of Drupal 8 with many new technical features. It should be noted that Drupal 9.0 will come with support for new libraries programmed in PHP including the latest versions of Symfony 4.4 and Twig which is a template engine.

According to our expert developers, we will find new technical features in version 9.1 such as :

All these new features will allow the new version of Drupal to offer you greater stability, high scalability and also better performance!

What are the important dates to remember?

How to plan this upgrade?

As you know, old versions always come to an end. Have you ever thought about migrating your site to the new versions available? We advise you to do it quickly because the development can be quite long and difficult to achieve depending on your website.

Please note that for a site redesign or migration, you must be concerned about the qualification of modules even if their compatibility with Drupal 8 is assured. It is also mandatory that you install the "Update Status" module in order to be able to make updates for contrib modules, customs modules and also from the core of Drupal to Drupal 9.

In order to help you plan your migration, it is recommended that you use a specialized Drupal agency with a team dedicated to your project. At Esokia, Jens, Drupal certified Team Leader and his team are currently preparing for the new version of the CMS in order to be operational to develop any website project on the new Drupal 9 version !

Why choose Drupal rather than another CMS?

And so who better to talk about this topic than one of our Drupal experts! 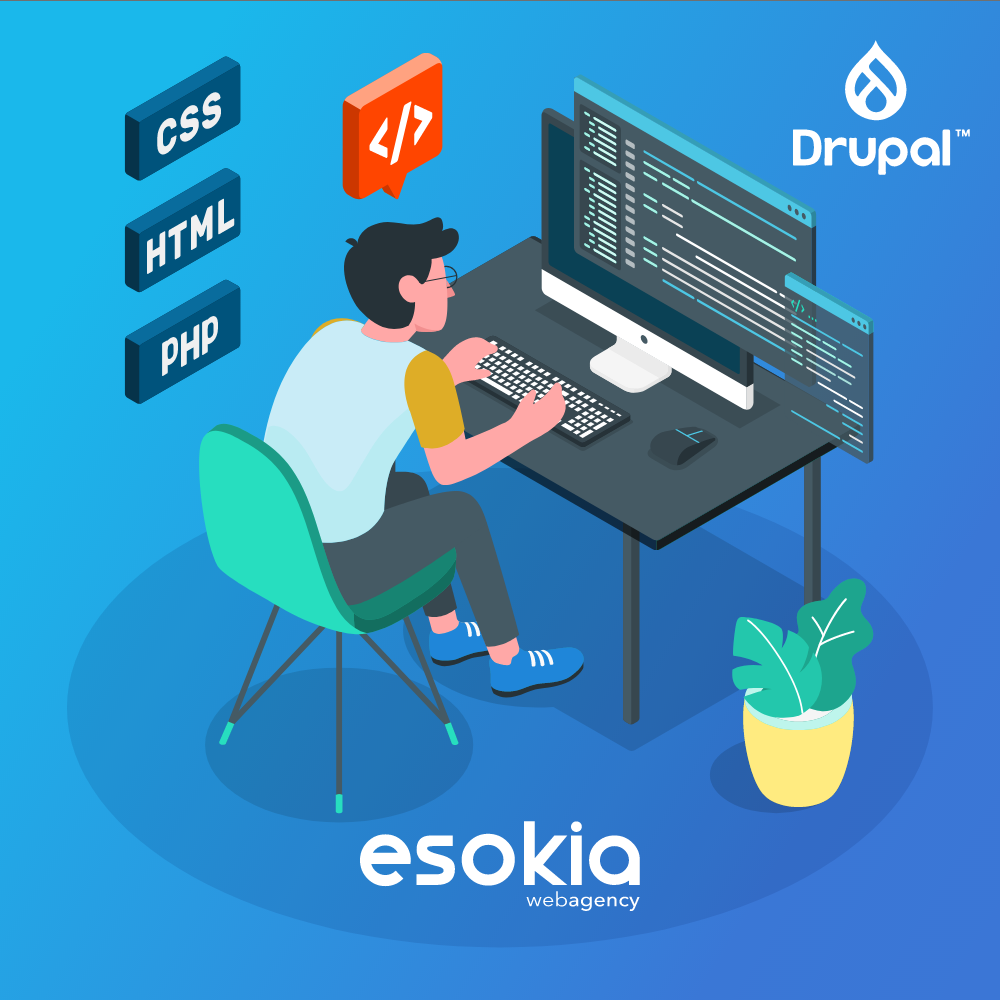 "From a developer's perspective, the thing that tempts me the most to create sites with Drupal compared to other CMS like WordPress is the configuration system implemented. To export configurations such as database, block or back office views, you just use commands located in the terminal with the Drush tool. It is very easy to export and import configurations from one environment to another" explains Divesh, Drupal Developer at Esokia.

"I also think Drupal sites are more secure. Developers are working hard to make frequent releases that contain security and performance updates. Also, many modules are already compatible and we can already make our own modifications to the contrib module using patches."

"Compared to WordPress, Drupal is a faster CMS. It is also a very powerful CMS in general. It doesn't involve a lot of resources at once and that translates into extremely fast server communication!"

As you can see, this upgrade is rather reserved to expert Drupal developers. Being a member of the Drupal association, our web agency develops many websites with this CMS. We also develop Drupal sites factories for different sectors such as banking, insurance or transport. If you would like further information, contact us!